Fitbit Blaze VS Surge: Which Fitness Tracker Is Best For You 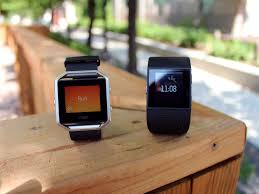 Fitbit, the king-pin of all fitness tracking devices.

One of the most reputable companies in today’s modern health & fitness market, making some of the best extraordinary gadgets that can aid users in keeping track of their health status and enhancement, while also being able to incorporate simple ordinary features like a real time watch.

Over the past few years, Fitbit has released a variety of health trackers and monitors suited to all types of sports and fitness routines. These technological advances are designed in such a user-friendly way that literally anyone is capable of utilizing one of these gadgets to track the status of all aspects of their overall health, such as their heart rate, sleep patterns, calorie intake, and so much more.

Want a fitness tracker but wishing for the sly look and feel of a smartwatch?

Easy, Fitbit has you covered with not one, but two distinct options for this best of both worlds feel. Their options either come down to the Fitbit Blaze or the Fitbit Surge.

Both devices have similarities in their base-level functions with awesome features included with the Fitbits. They have capabilities to control music, send and receive texts, track mileage, connect or sync with apps, and even has one of the largest fitness social groups where users can flock to for guidance, motivation, along with many more fitness tips and tricks.

A craze that has begun as somewhat of a battle between brothers, is the battle of Fitbit Blaze vs. Surge devices. The Fitbit Blaze was the first fitness tracker that the company ever developed, and it was intended not only to serve as a fitness monitor, but also be as compatible as an everyday watch. Though these are not to be considered smartwatches, they are the next best and closest to giving you the amazing capabilities of professional fitness and health monitors, while also giving you the benefits of wearing a watch/ somewhat cell phone. To begin the comparison, it should be noted that the Blaze and the Surge are essentially the same gadget, they just seem to differ in a few features and aesthetic design.

The Fitbit Blaze VS Surge

The Fitbit Blaze is basically a luxurious version of the Fitbit Surge. The Fitbit Surge was specifically designed to endure the weathering, as one may refer to it, of athletic fitness trials such as sweat, grime, as well as rubbing and bumping against other materials, all while even being able to withstand shock like impacts. You can see that the Fitbit Blaze has more of a watch-like design to its outer bodice, mixing a classy design along with a bang of modern day elegance, coupled with sleek features and accessories.

The Fitbit Blaze has even been described to be the next best thing when compared to the famous Apple Watch! Also, the Fitbit Blaze allows you to customize many of its components, including the elastomer band (which apparently gave many users skin irritation problems). One can find not only elastomer bands, but also leather bands, metal bands, and even polymer bands for those trying not to hurt their wallets too much by going with a cheaper option.

Another comparison to note, is that the Fitbit Surge was specifically designed for running and fitness applications. This gadget was intended to be as rugged yet sleek in design, and be able to offer as much comfortability rather than “nice looks.” Function-ability over fashion was what designers had in mind when creating the Surge.

On the other hand, the Fitbit Blaze as well, was definitely intended to serve as a very elegant medium between mixing both a watch and a fitness monitor.

The Fitbit Surge with a 1.25-inch LCD touchscreen offers a very nice screen monitor that users can easily navigate and perform tasks with, however the device falls short because it contains a dimly-lit monochrome screen, which translates to black and white.

Fitbit however, took the opportunity where the Surge was falling short, and made their Fitbit Blaze monitor even better by adding a full colored 1.66-inch LCD touchscreen that brightly lights up in a celebratory manner when you’ve reached each of your daily fitness goals (talk about motivating and fun).

The best advice that I can personally give you (that I, myself also abide by) is to always take advice and take heed to the opinions of those individuals who have already been there and done that by purchasing one of the above fitness monitors.

In other words, listen to what the people who already own these Fitbits have to say because they would know best!

The general consensus that I have found thus far, is that both products are truly great and viable options. However, multiple customers have commented on the below features, which I thought smart to list here so that interested buyers know just exactly what to consider before making this win-win fitness tracker decision.

This, as can be imagined, can be a huge let-down for some athletes, while also even proving to be worrisome to those who sweat extremely, or catch themselves in a rainstorm while out exercising. Though Fitbit does not recommend using them for swimming, or even showering with them, they are rated to be “water resistant”. The Fitbit Surge is rated at 5 ATM (atmospheric pressure) and the Fitbit Blaze at 1 ATM, meaning that the Surge is much more capable of handling water pressure than the other, though this still doesn’t mean go drop your Surge in the bathtub.

As one can see, deciding between which Fitbit fitness tracker is going to better suit your needs is a little more of a tedious task than everyone expected. The important thing is to take your time, do your research and make sure to consider all of the key points listed above so that you can make the best-suited decision for your needs.

There are many things to consider when choosing the right Fitbit that will inevitably become your new closest gym and workout partner. There are too many different features and reasons with which to argue that one needs to get a Fitbit in the first place. Hence, it’s important that each person be aware of why they are getting it and what they are primarily going to be using it for.

Because whether it be a stylish choice or an athletic one, having a Fitbit can completely revolutionize your health and overall life.

I personally am a daily user of my Fitbit (a much simpler version than these) and I absolutely love keeping up with my progress and holding myself accountable with the help of my device.

Taking care of yourself and working out with a Fitbit makes living a healthy lifestyle seem like a breeze, which is what individuals such as you and I need, no more hassle.

Take control of your life with an easy, cost efficient and stylish option.

Either of the above Fitbit devices offer a slew of great features and benefits to the wearer, so there really isn’t a wrong decision to be made here. It really all just comes down to personal preference. I hope you enjoyed this informatory article and I hope to see you all at the gym with your sleek new Fitbit donned on your wrists.

Just keep rising, grinding and working guys, you got this!