The Many Advantages of Powerlace Self-Tying Shoes 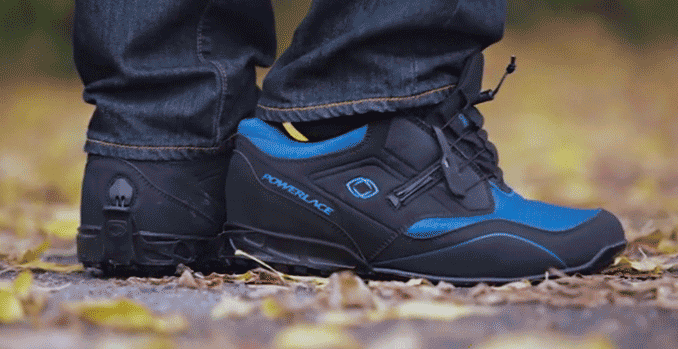 A problem that is as simple as a shoe lace coming untied during your workout may not seem like much to everyone else. But when you are trying to push yourself beyond your limits, you don’t need any distractions, and that includes unruly laces. That is where the magic of self-tying shoes comes in. Powerlace’s shoes allow you to go hands-free with your athletic gear with their amazing line of self-lacing shoes. Along with these innovative benefits, these shoes are also stylish and are designed guaranteed to fit comfortably.

The Powerlace Self Lacing Shoes Technology

This impressive footwear features cool shoe lacing technology that is unlike any other. The patented technology starts off with a level at the heel of the shoe that unlocks a mechanism using max strength nylon coated stainless steel wires. The Thermoplastic pullers adapt to your movement so that the shoes stay secure at all times throughout the natural movement of your feet. And the solid TPU sole is abrasion and flex fatigue resistant to provide you with better performance overall during work or play.

The laces on these shoes are made from strong Kevlar material that has an impressive breaking strength of 250lbs. There is also a lacelock feature that allows the wearer to adjust the laces to meet the right amount of tension.

The unique self-lacing technology is activated using your body weight. There is no need for batteries, springs, gears, or motors. Allowing you to enjoy a lightweight shoe that works like no other in the industry.

The Powerlace P-One shoe is modernized outdoor footwear that features a  cool shoe lacing adjustment system you only have to configure once, then you’re good to go. But there is more to this shoe than its unique lacing effects.

The P-One features Equal Tension Distribution that guarantees your foot experiences an equal amount of tension across the top while you are wearing them. The self-lacing technology also ensures a precise fit that will stay the same no matter how many times you remove or put on the shoes. And the dynamic balancing of the Powerlace shoes puller technology allows for the user to perform continuously, with natural movement and better coordination.

The TPU sole has an aggressive grip featuring studs that allow for better control while walking on rugged outdoor terrain. And the outsole resistance can help you to retain your balance even when you are walking on slippery surfaces.

Other Areas Where Self Tying Shoes Could be Beneficial

While we have covered the benefits of self-tying shoes for athletes, that is not the only target consumer group that these shoes could be marketed to. Individuals who have trouble lacing or tying their own shoes such as those with arthritis or children on the Autism Spectrum could also greatly benefit from no longer having to deal with loose laces. This could help people of all ages have more freedom and independence while also providing them with a great amount of self-confidence at the same time.

Powerlace Shoes was started by a small group of friends who wanted to conquer the goals that so many shoe designers in the past were unable to achieve. They set out with a common goal in mind and were able to achieve it, proving the power of hard work and dedication. However, that is not the only thing that sets the Powerlace brand apart from all the others. The fact that the brand has been able to find the perfect balance between innovation and industrialization has helped them to become a new leader in a different genre of footwear.

The company’s motto is “lacing is not a sport”. In fact, they feel that lacing our shoes is a redundant activity that we shouldn’t have to constantly do on a regular basis. However, even the biggest and most popular names in footwear have yet to come up with the ingenious technology that Powerlace shoes have accomplished after 15 years of research.

The team came together to build a prototype that involved countless hours of research and hands-on tasks to get the design just right. Once they became confident in their efforts, they were ready to introduce their self-lacing shoe to the world.

In November 2014, Powerlace released a Kickstarter campaign that generated plenty of interest. And the company has been growing ever since. They have never stopped providing their target groups with alternative tying solutions that were simple and beneficial. Since 2014, Powerlace Shoes has partnered with a reputable Chinese shoe manufacturer as well as a quality design team to help make their initial production run a reality.

Powerlace shoes are based in Quebec, Canada and are currently available for pre-order through the company’s Kickstarter campaign. The P-One is available in black with accent colors including blue, orange, red and yellow. As more people become aware of this technology, we are sure to see retailers pick up the Powerlace brand in the future.